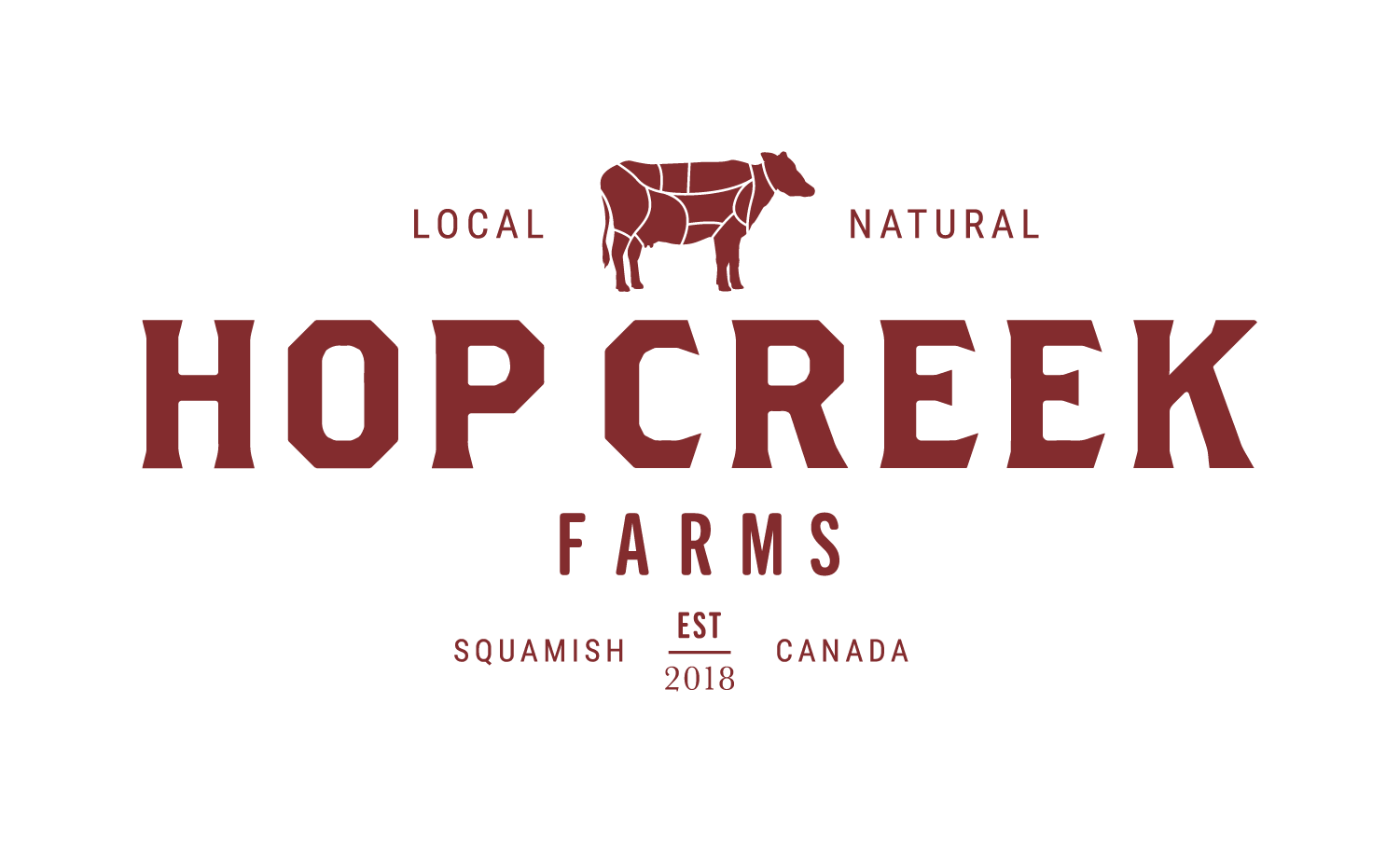 Hop Creek Farms, located in the beautiful Squamish Valley of British Columbia, is a 33-acre farm that sustainably and ethically raises 100% grass-fed/grass-finished beef, 100% grass-fed/grass-finished lamb, pastured pork, and pastured chicken. There are two creeks that intersect and run through our farm property, Dryden Creek and Hop Creek, which is what inspired the name.

How We Became Hop Creek Farms

To tell you who we are, we think it's helpful to know where we came from. The Wright Family has a long history of ranching in B.C., with roots in the Cariboo region traceable back to 1862 when my great-grandfather, William Wright and his son John came from Upper Canada. They supplied horses and beef for the miners who frequented the area and became known as some of the best handlers for both cattle and horses. For four generations my family has worked on, leased, and owned various properties in the livestock business (for an extended overview, check out the excerpt below from the B.C. Cowboy Hall of Fame).

Carrying on the family tradition, in 1969, my parents, Iris and Dave Wright purchased Murphy Meadow Ranch, also in BC's Cariboo Region, just south of Williams Lake. Almost 50 years later, the main Ranch at Murphy Meadow, now run by myself, Burt Wright and my wife, Steph, is home to 350 head of cattle, all of which are 100% grass-fed and grass-finished, meaning they're both antibiotic and hormone free. We firmly believe in ethically raised and cared for livestock, have a passion for what we do, and take great pride in our animals and the products we sell.

In 2017, we joined Steph's parents, Ingrid and Greg McDougall to create Hop Creek Farms in our new home in the Squamish Valley. With my family's history and expertise in cattle and livestock management coupled with Steph's family's business expertise along with a shared vision to supply food that was truly local to our neighbours, our families have come together to build a farm with animals that are sustainably and ethically raised.

Why Our Farm is Different

Our sister ranch, Murphy Meadow Ranch, is based in the Cariboo Region and raises our 100% grass-fed cows from birth in the higher altitude, nutrient-dense, and open-range grasses of the Interior. Towards maturity, the cows make the trip down to Hop Creek Farms to spend their later days in the lush grasses of the Squamish Valley—where they keep company with the lambs, pigs, and chickens, who have been raised exclusively on our farm.

Our livestock and pastured pigs and poultry are raised in the best environment possible, with a focus on the health, well-being, and happiness of all the animals. Along with our team, we are on the farm every day to ensure this. Our cows and lambs are 100% grass-fed and grass finished (no bulking up on grains at any point in their lives), and our pastured pigs and chickens are fed certified organic, non-GMO feed.

Presently, we are able to serve Squamish for local home delivery and Brackendale for local pickup at our farm. Once we know we are providing the best possible service to our customers, we will look to expand our operations, while always ensuring that we are preserving the quality of our supply.

Wright Family - The family roots can be traced back to 1862 when William Wright and his son John came from Upper Canada. They took up land at 137 Mile and started ranching to supply miners with beef and other farm products. John had a son, Burton, and his family grew up at Meadowbank Ranch a few miles south of Lac La Hache, known by locals as Wright's Corner. Burton's sons were some of the best cowboys around and had a rare gift for handling horses and cattle.

Stan, born in 1920, the oldest son of Burton and Mary, grew up working on one of his father's ranches and for almost 60 years Stan worked the Timothy Lake Ranch. He built it up to 900 acres running a successful yearling operation. Stan ran the ranch until his retirement in 1992.

William Wright was born in 1923. Willie stayed on the family ranch with his elder brother Stan, and they raised Hereford cattle, and raised and trained horses for sale. He and his family moved to 140 Mile and he continued to work in the ranching trade, first for his father-in-law and then on his own. He died in January 1985.

The younger brother David was born in 1927. Dave married Iris Fletcher in 1958 and they leased the Jones Lake Property from her father for a few years, and then went to 127 Mile to manage the ranch for Dave's aunt, before buying the Murphy Meadows Ranch on Knife Creek in 1967. When Dave died in 1985, Iris carried on alone, looking after some 1,700 acres under fence and over 500 head of cattle on the ranch that she and Dave had built together over the past 19 years. Iris and their son Burt are still on the ranch.

The Wright family members were first and foremost working cowboys. It was their vocation, their passion and their life.

(Excerpt from the B.C. Cowboy Hall of Fame. To read more, head to the archives.)

Have any questions about our farm? Please just ask! We started asking a lot of questions about the meat that we were eating and that’s why we are in this business, so we’re happy to share. After all, you should know where your food comes from!

Send Us a Message
Return To Top